Soft music and sweet talk are important parts of human courtships. But some other species prefer their sweet nothings to be a little louder. 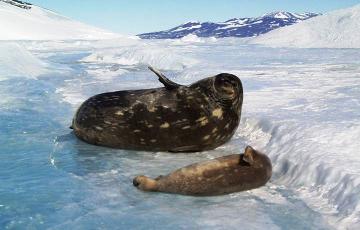 Consider the Weddell seal, which lives in the Antarctic. The male appears to use special sounds when he’s trying to attract new lady friends. The females might evaluate those sounds to determine which potential mates are the fittest.

Researchers studied the behavior of one male Weddell in particular in 2002. The team included Jesse Purdy, a behavioral psychologist at Southwestern University in Texas. He recorded the sounds with an underwater microphone, and has since studied them in detail.

The seal was code named Pink 841. He poked his head up just minutes after the research team drilled a hole in the ice off the coast of Antarctica. He hung around for months, keeping watch for both potential mates and competitors.

The researchers found that Pink 841 used several kinds of sounds. When females were around, he used a loud trilling sound, along with mews, growls, and whistles. He used more aggressive chirps, knocks, and jaw claps when other males showed up. And his sounds were different from those of other males.

Purdy and others are still studying the sounds to learn more about the courtship vocabulary of this aquatic Casanova.