Despite centuries of exploration, the oceans continue to yield many surprises.

In the last few years, for example, scientists have found that a long ridge beneath the north polar ice cap is dotted with volcanoes, and with vents of superheated water that could be home to many new species. 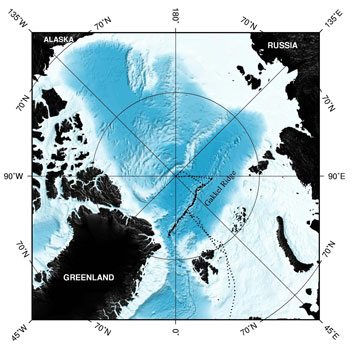 A map of the Arctic Ocean floor, indicating the location of the Gakkel Ridge. Hydrothermal vents were discovered along this ridge. Map: Hedy Edmonds

It’s known as Gakkel Ridge. It stretches 1100 miles, from Greenland to Siberia. It’s part of the Mid-Ocean Ridge, which circles the globe at the boundaries between continental plates. As the plates move apart, molten rock rises to the ocean floor, forming new crust.

Gakkel Ridge is spreading more slowly than any other part of the Mid-Ocean Ridge -- only about half-an-inch per year. Because of that, scientists expected it to be pretty quiet.

But in 1999, scientists aboard a Navy submarine detected evidence of volcanic eruptions. And two years later, an international expedition compiled the most complete picture to date.

Scientists plucked samples from the ocean floor, and used sonar to map most of the ridge. They also “sniffed” for chemicals pouring from vents of superheated water known as “black smokers.” Typically, they’re surrounded by an amazing variety of life, which feeds off chemicals that bubble up through the vents.

Scientists found evidence of up to a dozen black smokers along Gakkel Ridge. An expedition next summer will carry robotic submarines to photograph them and gather samples of the water and life around them. The expedition is sure to reveal a few more surprises about the bottom of the sea.