When they add fertilizers to their fields, farmers from Montana to Pennsylvania and points farther south can increase crop production, helping to feed a hungry world. But those same fertilizers can eventually make their way into the Gulf of Mexico. There, they may actually kill off the fish and shellfish, creating a “dead zone” along the Gulf Coast. 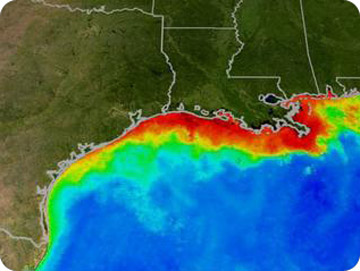 Rain washes nitrogen and phosphorous from cultivated fields into several major river basins, which all feed into the Mississippi. Sewage and animal waste also enter the river. When water from the Mississippi enters the Gulf, it’s laden with these materials. In fact, the amount of nutrients the Mississippi dumps into the Gulf has doubled over the last half-century.

The fertilizers are as tasty to algae in the Gulf as they are to crops in the Midwest. Algae at the surface gobble up the nutrients, then reproduce like crazy. Dead algae and other organic matter sink to the bottom, where they’re eaten by bacteria.

The problem is, the bacteria, like other sea animals, also consume oxygen in the water. After a while, there’s almost no oxygen left at the bottom, so fish and shellfish begin to die. That’s a big problem, because the Gulf supplies most of the country’s shrimp and oysters, which live on the bottom.

The dead zone develops during summer, when there’s more sunlight. It can cover several thousand square miles, from the Mississippi delta to the upper Texas coast.

It’s a problem that seems to be getting worse -- a creeping “dead zone” that encompasses more and more of the Gulf of Mexico.