Tropical coral reefs are some of nature’s most colorful and diverse ecosystems. They provide Technicolor displays unlike those found anywhere else on Earth. 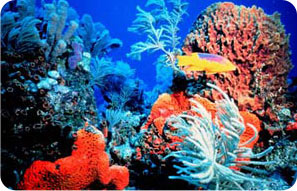 But many coral reefs aren’t looking so good these days. Like a Hawaiian shirt doused with Clorox, they’ve had the color bleached right out of them. And that can damage or even kill an entire reef system. In the last few years, in fact, bleaching events have decimated corals in the Caribbean, the Galapagos Islands, and in Australia’s Great Barrier Reef, to name a few.

Coral reefs are built by tiny animals that produce hard external skeletons. But a reef’s color comes not from the coral itself, but from algae that live inside the coral animals. The algae provide energy to the coral, which give protection, nutrients, and carbon dioxide in return.

The algae are very sensitive to environmental change, though. Slower winds, more sunlight, increased pollution, and other factors can drive them away.

But higher sea temperatures resulting from global climate change are the most important culprit. An increase of just a couple of degrees, maintained for a few weeks, can cause coral bleaching.

Scientists are studying coral bleaching at a marine preserve in Hawaii. They’re taking bits of coral from the reef, warming them just enough to bleach them, then returning them. They’re tracking the test coral to see how they respond. The research should help determine how corals react to warmer temperatures.