The tangled thickets of trees known as mangroves don’t look all that mobile. In some parts of the world, though, they’re backing up -- seeking higher ground as the oceans rise to higher levels. But in some regions, the mangroves might not be able to retreat far enough, so whole mangrove “forests” could disappear. 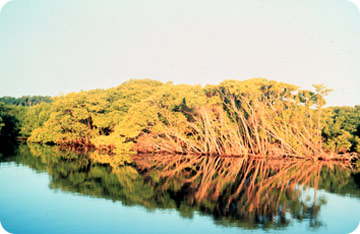 Mangroves are found in warm coastal regions around the world. They grow along the coasts, in regions where saltwater and freshwater mingle. Their dense, knotty roots provide shelter for crabs, oysters, fish, and many other species of marine life. They also filter pollutants before they can flow into bays and estuaries, and they protect the coast from storms.

As Earth’s climate warms, though, global sealevel rises, forcing the mangrove to retreat.

But a recent study by the United Nations says that in many small Pacific islands, where mangrove stands are common, there’s not enough room for them to get clear of the rising waters. In some cases, they’re blocked by human settlements. In others, the islands just aren’t tall enough for the mangrove to keep their “feet” above water.

Some islands could lose up to half of their mangrove habitats by the end of the century. The regions most at risk include American Samoa, Fiji, Tuvalu, and the scattered islands of Micronesia. But the report says that the loss can be minimized by moving houses and roads out of the path of the retreating mangrove -- giving these vital coastal habitats room to climb to higher ground.