A walk along most Atlantic or Gulf beaches is likely to include an encounter with a smelly mass of seaweed known as sargassum. It’s a minor nuisance if you’re out for a stroll -- but it’s home to many species of marine life. 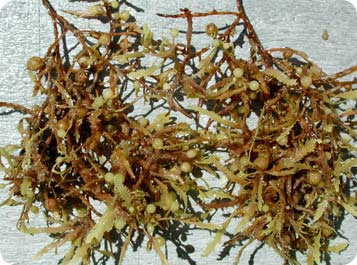 Sargassum is a type of brown algae. It comes from the Sargasso Sea, a region of the Central Atlantic.

Tiny air bladders keep the sargassum afloat. It can form streamers that stretch for miles along the boundaries between water masses, or big yellow and brown “mats” that cover large areas of the surface. Strong currents around the Sargasso Sea can carry sargassum around the world.

Sargassum might not be a favorite among beachcombers, but it is a favorite for people who like sport fishing. That’s because it’s a habitat for many species of fish and other marine animals, which in turn attract bigger fish.

Young fish and sea turtles float with the sargassum because it provides both food and protection. A study a few years ago off the coast of Mississippi found lots of young flying fishes, jacks, and triggerfish beneath the mats. It also found young and adult tuna, marlin, and other gamefish. Jellyfish float with the sargassum, too.

And when it washes ashore, it can continue to shelter some of the animals that traveled with it, along with crabs and others that live on the beach. And it’s a source of food for birds and other beach dwellers. So while it might not smell good to us, for many species of life, sargassum smells just like home.