It wasn’t exactly the starship Enterprise, but in 1960, a craft carried two explorers where no one had gone before -- or has followed since: to the deepest part of the ocean. Their craft was the Trieste, and it descended to the bottom of the Challenger Deep. At a depth of about seven miles, the craft’s hull was squeezed by more than eight tons of pressure per square inch. 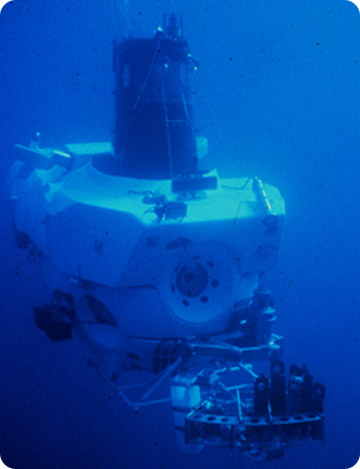 Today, scientists make regular use of similar craft, called submersibles. They’ve made thousands of dives, and explored most of the world’s oceans and seas.

Most submersibles carry a pilot and one or two scientists. They remain underwater for a few hours at a time, and can cover several miles.

Most of today’s submersibles are limited to depths of three or four miles. But that still lets them explore all the way to the bottom of most of the ocean -- and provides some remarkable views.

In 1974, for example, three submersibles confirmed that the seafloor is spreading at the mid-Atlantic Ridge. And three years later, one of those craft -- the Alvin -- discovered hydrothermal vents on the floor of the Pacific. These vents of scalding water, laden with chemicals, support vibrant colonies of tube worms, fish, and other life.

Alvin is showing its age. So its operator, the Woods Hole Oceanographic Institution in Massachusetts, is working on a replacement. The new submersible should help scientists make even more amazing discoveries when it enters service in about three years.