When fish and other creatures swim into the crater of a submerged volcano in the south Pacific, they’re entering a strange environment known as the “Moat of Death.” Temperatures in the moat are up to almost 180 degrees Fahrenheit. Toxic waters kill almost anything that enters, so dead organisms pile up on the bottom of the moat. 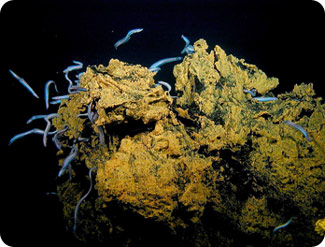 Swarms of small synaphobranchid eels, Dysommina rugosa, live in the crevices on the summit of Nafanua. Scientists dubbed this site

This amazing site is just east of the Samoan islands. It’s atop a massive underwater volcanic mountain known as Vailulu’u. A research team studied the site several years ago. When the researchers returned to the site in 2005, they found some remarkable changes.

A new volcanic cone was rising from the wide, deep crater at the top of the mountain, and was already a thousand feet tall. Scientists named it Nafanua, for the Samoan goddess of war. There’s a wide “moat” of water between Nafanua and the rim of the surrounding crater. Volcanic vents inside the moat are pumping out water that’s rich in iron, carbon dioxide, and other materials, creating a deadly brew.

About the only living thing inside the moat is a species of acid-tolerant worms, which are gobbling up bacteria around piles of dead fish.

Some organisms are swept up by a water current that encircles the mountain. They’re carried to the summit, where a colony of eels awaits them.

Today, the summit of Nafanua is more than 2,000 feet below the surface. But it’s growing in a hurry. Within decades, it could breach the surface -- adding a new island to the Samoan chain.