The oceans are always changing. In the early 1990s, for example, several studies showed that the north polar ice cap was getting thinner. Scientists confirmed the trend later in the decade from below the ice cap -- during a series of research cruises aboard U.S. Navy submarines. 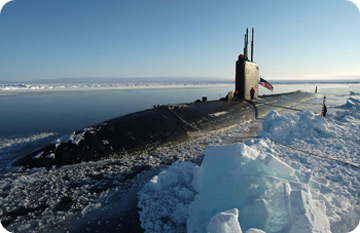 The project was called SCICEX -- the Scientific Ice Expeditions. It began with a test run in 1993, and continued with annual cruises aboard nuclear-powered attack submarines from 1995 through ’99.

About a half-dozen civilian scientists took part in each cruise, which lasted several weeks and covered thousands of miles -- much of it beneath the Arctic ice. The scientists worked in a torpedo room that was converted to lab space.

Their research showed that a lot of pollutants are collecting in the Arctic -- brought in by warmer Atlantic waters. It also revealed volcanic activity along Gakkel Ridge -- a zone where two plates of Earth’s crust are spreading apart.

The SCICEX project ended as the Navy began cutting back its fleet of subs after the end of the Cold War. But other subs continue to conduct occasional scientific research as they patrol the world’s oceans.