The tasty fish known as red drum can be one of the loudest fish around -- sometimes loud enough to hear from above the water. In fact, that’s where it gets its name -- it makes a sound like a drum. 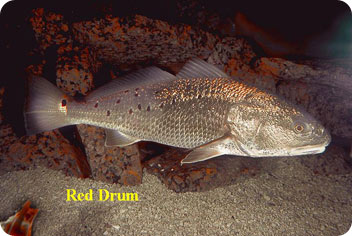 Red drum is one of hundreds of species of fish and other sea creatures that make sounds. Many of the sounds are part of the mating ritual, although others can serve as warnings or as calls to family.

In the case of red drum, the sounds come from males who are trying to attract females. They make sound by contracting the muscles around the swim bladder -- basically a small airbag that helps the fish control its depth. These muscles are strong and fast. When the fish squeezes them in a hurry, it creates a pressure wave that travels through the water as sound.

A few years ago, researchers listened in on red drum off the Texas coast during mating season. They towed an underwater microphone behind a boat as they sailed along a grid in the Gulf of Mexico.

The scientists found that the mating chorus began in late afternoon, picked up around sunset, and grew to a roar in the evening.

A female may be attracted by a certain frequency or loudness -- traits that may indicate a male’s strength and vitality. When she finds the right call, she releases her eggs and the male fertilizes them. So a loud “drum beat” plays a role in keeping the red drum population strong.