The 1770s were a stormy time in southern Georgia, with perhaps a half-dozen tropical storms plowing through the region. The first couple of decades of the 1800s were stormy, too, along with a couple more in the mid 1800s.

Written records of the storms range from spotty to non-existent. But scientists have found strong evidence of the storms in another kind of record: tree rings.

In fact, tree rings could help scientists piece together the record of hurricanes along the Atlantic and Gulf coasts for the past several centuries. That information would help us understand the cycles of hurricanes -- an important topic in today’s discussions of global climate change. 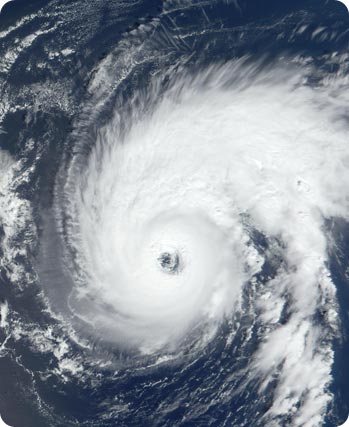 A team of scientists studied the rings of long-leaf pines near Valdosta, Georgia. In particular, they looked for a certain form of oxygen in the parts of rings that formed late in each year’s growing season -- the time of greatest tropical storm activity. The heavy rains associated with hurricanes have less of this oxygen isotope than everyday rainfall. So if the scientists found little of it in a particular ring, they surmised that the ring formed during a stormy season. Their findings showed good agreement with the records of known storms.

A hot research topic today is determining if Atlantic hurricanes occur in regular cycles, or if global warming is causing an up tick. Examining more trees in coastal environments could help by yielding a more complete record of hurricane activity over the last several centuries.