Some of the tiniest creatures in the ocean play a big role in controlling our planet’s temperature. But as the temperature goes up, the overall volume of these creatures appears to go down, which reduces their ability to keep Earth from overheating. 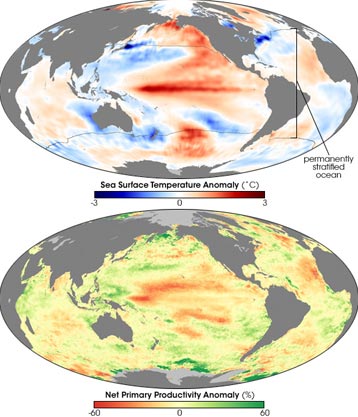 The creatures are known as phytoplankton. They’re tiny plants that float near the top of the oceans. Small fish feed on them. The small fish are eaten by bigger fish, and on up through the food chain.

A satellite that’s watched Earth for the past decade found that as ocean temperatures climb, the population of phytoplankton drops. Without phytoplankton, populations of fish, whales, and other sea creatures in parts of the ocean may be in trouble.

But the phytoplankton also serve another important role: They help control the temperature of the atmosphere.

But most scientists agree that carbon dioxide from cars and factories is warming up the atmosphere, which in turn warms the oceans. Warmer waters don’t carry enough nutrients to feed the phytoplankton, so the amount of phytoplankton declines. And with less phytoplankton, more carbon dioxide builds up in the air -- a loop that could contribute to global warming in the decades ahead.