You can’t tell by looking, but New York City is at the head of one of the world’s most impressive canyons -- the Hudson Canyon. From the mouth of the Hudson River, it extends about 300 miles into the Atlantic Ocean, and cuts almost four miles deep into the continental shelf. It’s a conduit for moving sediments, nutrients, and pollution from the land to the deep ocean. 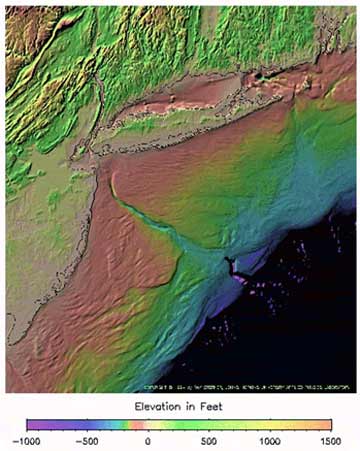 This massive feature is one of more than a hundred “submarine canyons” that are notched into the ocean floor off the coasts of all the world’s continents. The biggest, which slices from the mouth of the Congo River, is longer, wider, and deeper than the Grand Canyon.

A submarine canyon may begin as a river pours into the ocean, eroding a channel in the shallow continental shelf. But much of the carving may be done by torrents of muddy water stirred up by storms, earthquakes, or other big events.

Scientists have found abundant life in many of these chasms, from their rims down to the bottoms of their steep cliffs. This abundance may be due in part to nutrients from the rivers that feed the canyons.

In fact, submarine canyons are an important source of nutrients and sediments in the deep ocean. They’re also a major source of pollution. Until a few years ago, for example, New York and New Jersey dumped raw sewage into the Hudson Canyon, which funneled it into deeper Atlantic waters. Much of the sludge may still be inside the canyon -- making the Hudson not only one of the world’s largest canyons, but one of its nastiest, too.