Greenland is one of the least green spots on the planet. It’s a slab of rock covered with ice. In recent years, though, its ice cap has been shrinking. It’s been losing huge amounts of ice each year, as ice melts during the summer, but isn’t replenished during the winter. 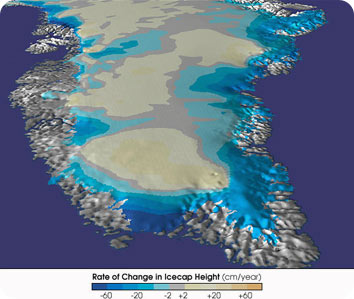 The shrinking icecap is just one issue that scientists around the world are studying as part of IPY -- the International Polar Year. It’s actually a two-year effort that began in March and will continue into 2009.

The current IPY is looking at the environment and ecosystem at both poles. Scientists from dozens of countries are examining the polar ice caps, the atmosphere above them, and the water around and under them. They’re also looking at the birds, fish, and mammals in polar environments, taking the most complete census of polar life ever attempted.

One project combines a study of sea life with a study of the ocean itself. Researchers will strap instrument packages to the backs of southern elephant seals. As the seals swim, the instruments will record their motions, along with the water temperature and salinity. The readings will be transmitted to orbiting satellites, which will relay them to researchers. The project will help scientists learn about the habits of the seals, while using them as assistants to learn about conditions in the polar seas.