If you dive a few hundred feet into any ocean and shine a flashlight into the dark, chances are you’ll see a flurry of small flakes all around you. The flakes are known as “marine snow.” They’re not flakes of frozen water, though, but slimy clumps of small organisms and other matter that are falling toward the ocean floor. They’re an important source of energy for life at greater depths, and they help reduce global warming. 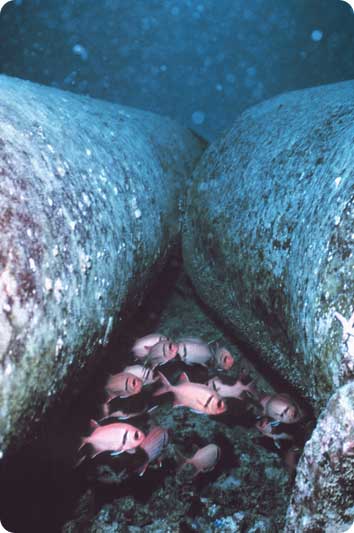 The snowflakes form in the upper layers of the ocean.

When the tiny marine plants and animals known as plankton die, their bodies start to sink. Many of these bodies can clump together, along with algae and bacteria, fecal matter, grains of sand, and other bits of material. They’re held together by mucus from the plankton. The snowflakes fall fast enough to reach the bottom in a few days.

Most of them don’t reach the bottom, though. Instead, they’re gobbled up by other small organisms at depths of up to a few thousand feet. There’s no sunlight at those depths, so the snowflakes are a critical source of energy for life. The flakes that do make it to the bottom either get eaten by bottom-dwellers, or they mix with the rest of the “ooze” on the ocean floor.

That’s where marine snow plays another important role. Plankton remove carbon from the atmosphere -- an element that contributes to global warming. So even though marine snow isn’t like the snow that falls on your back yard, it may have a similar effect -- it helps to keep Earth cool.