As supplies of oil and natural gas continue to shrink, scientists are looking for new sources of energy to replace them. One place they’re looking is the bottom of the oceans. Huge amounts of natural gas -- mostly methane -- are “frozen” in layers known as gas hydrates. 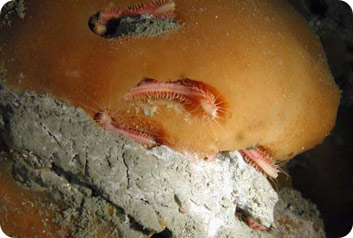 Hydrates form as methane and other gases percolate up toward the ocean floor. Under the great pressure and cold temperatures found at depths of a quarter-mile to a mile or more, water molecules form little “cages” around the hydrocarbons. These ice-like structures can fill the pores in ocean-floor sediments. They can also form thick beds of almost pure hydrate -- some of them more than a half-mile thick.

Hydrate beds are found in all the world’s oceans. Some of the largest concentrations are in the Gulf of Mexico. Most of the methane gas seeps up from deposits deep below the ocean floor. In addition, bacteria consume dead plant and animal matter that washes into the Gulf and produce more methane.

One of the largest hydrate concentrations is in a formation known as Blake’s Ridge. It covers an area the size of Rhode Island in the northern Gulf. This year, scientists plan to finish a network of monitoring stations in the Gulf to help them learn more about these hydrates.

While the potential energy from gas hydrates is huge, it won’t be easy to get the gas to shore in a usable form. It probably will take new technology to begin to use this energy resource.