Currents of warm, salty water flow from the Mediterranean Sea into the Atlantic Ocean. Their high salt content makes the currents denser, so when they enter the Atlantic, they sink and form big eddies that spin at depths of more than half a mile. Called “meddies,” they help drive ocean currents that help keep Europe relatively warm. 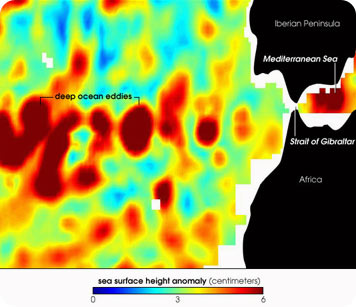 Until recently, though, meddies have been hard to track, making it hard to know how they’re changing over time. But today, using satellites in Earth orbit, scientists are watching entire meddies as they spin through the Atlantic.

That’s one of many ways in which satellites are helping scientists monitor the oceans.

Some satellite data help them track life in the oceans. For example, they can see dense, colorful blooms of plankton -- the tiny organisms that are at the bottom of the food chain -- at the top of the ocean.

Satellites are especially good for large-scale studies of the oceans themselves. The oceans are so vast that ships and automated buoys just can’t see everything that’s happening. But satellites can -- they see the entire planet every day.

Satellite instruments chart ocean height, surface temperatures, sea-level winds, and the distribution of ice. They monitor global and local currents. And by measuring tiny variations in Earth’s gravity, they can even chart the contours of the ocean floor -- peering deep into the oceans from the heights of Earth orbit.