The cuttlefish is the “stealth fighter” of the seas. It disguises itself by changing colors, scares off rivals with bold patterns, and eludes predators by dropping decoys. And if all else fails, it’s jet propelled. 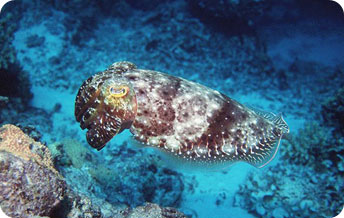 The cuttlefish isn’t a fish at all. It’s a mollusk -- a relative of the octopus and squid. It ranges from a few inches to a few feet in length, and it has eight arms and two tentacles. It’s found in coastal waters around much of the world.

Most mollusks have external shells. But the cuttlefish doesn’t, so it would appear to be easy prey. But nature’s given it an amazing array of defense mechanisms.

First is the ability to quickly change color and texture. The cuttlefish has several kinds of pigments, along with cells that reflect the colors around it. Its skin can ripple with vibrant color, or half of its body can take on one pattern, while the other half takes on another. And the male displays a zebra-stripe pattern to scare off other males.

As it changes color, tiny muscles can give its skin the texture of a rock or other object. Its large brain triggers these changes almost instantly. The next line of defense is ink. The cuttlefish can blow a cloud of ink, or send out bubbles of ink coated with mucus to confuse its predators. And finally, it can squirt water at high speed, propelling it away from danger like a rocket.

But the cuttlefish itself can’t fully appreciate some of its own defense mechanisms. It’s color blind.