Like the fire-breathing monster for which it’s named, a jagged tower of rock and metal named Godzilla rose high above the ocean floor -- more than 15 stories. A jet of scalding water blasted from its top. And not even decapitation could stop it: After its top two-thirds fell over, it kept on jetting black water, and quickly began rebuilding itself -- a process that continues today. 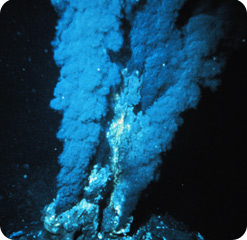 Godzilla is one of the largest underwater vents known as “black smokers.” They grow at mid-ocean ridges, where plates of Earth’s crust are pulling apart. The areas around black smokers teem with life -- from mats of bacteria, to long tube worms, to shrimp that have no eyes.

Black smokers form when water seeps down through cracks in the ocean floor above areas of hot rock. The water is heated to hundreds of degrees, and it dissolves iron, sulfur, and other elements from the water. The hot water jets back up through the ocean floor. These jets are known as “hydrothermal vents,” and the first were discovered 30 years ago. Relatively cool vents are known as white smokers, while the hottest are black smokers.

Bacteria live off the chemicals from the vents. In turn, the bacteria support some of the most abundant and diverse ecosystems on the planet -- ecosystems that contain hundreds of species found nowhere else. And when a new one spurts to life, it’s soon surrounded by a thriving community -- a community supported by a fire-breathing tower of rock.