The bottom of the Gulf of Mexico leaks like a roof after a hailstorm. Oil and natural gas ooze up through cracks in the seafloor. But these cracks aren’t zones of death, as you might expect. Instead, they’re home to thriving colonies of tube worms, crabs, and other animals -- including tiny creatures known as “ice worms.” 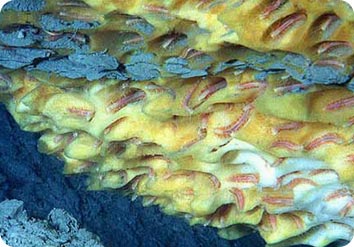 The ice worms were first seen 10 years ago. Penn State researcher Charles Fisher discovered them while studying one of the colonies of life from a submersible. He saw hundreds of the little ice worms burrowing into a block of methane ice.

As methane gas bubbles up to the ocean floor, the intense cold and pressure at these great depths cause it to freeze. It forms mounds of slushy ice that look like geodesic domes. Bacteria accompany the methane and other gases as they rise from deep underground, and that may be what attracts the ice worms.

The worms are called polychaetes, and they’re similar to other species found around the world. The small, pink worms are no more than a couple of inches long. They probably burrow into the ice to eat the bacteria, which likely get their energy from the methane’s hydrocarbons. The ice worms defend these burrows against other organisms, so it’s possible that a worm spends its whole life inside a single hole in the ice.

Because they’re at depths of a couple of thousand feet, though, much about the ice worms remains a mystery. Scientists can’t often venture into the lairs of these cold little burrowers.