Humans aren’t the only mammals to use nets when they go fishing. Some humpback whales do it, too. But their nets are made of bubbles. The humpbacks swim in circles, blasting air through their blowholes. 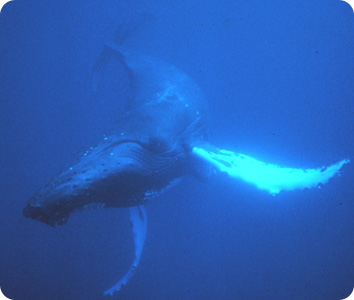 This creates a “net” of bubbles that traps krill and fish inside. The whale then swims up through the middle of the net, opens its jaws, and traps hundreds of pounds of food at a single gulp.

The unusual fishing technique is only one feature that attracts scientists and the rest of us to these giant creatures. Another is their songs.

Scientists have recorded songs from humpbacks all over the world. The songs differ from ocean to ocean, and even from season to season. The songs all seem to come from males, who may sing to attract mates or threaten rivals. But much of the meaning remains unknown.

Humpbacks generally feed in cold waters, then travel long distances to bear their young in warm climates. A few thousand North Pacific whales, for example, winter over in Hawaii, then cross 3500 miles of ocean to their feeding grounds in Alaska.

Humpbacks have been decimated by commercial whaling operations. Their numbers have dropped from around 125,000, to perhaps 30,000 to 60,000 today. Yet the numbers have rebounded in recent years, as many countries have banned whaling. The ban may allow these giants to keep throwing out their fishing nets in the centuries ahead.