After the Titanic sank in 1912, world shipping powers began a program to find and track icebergs, and keep ships well informed of their positions. The program has saved countless lives. It’s also helped oceanographers learn more about them. 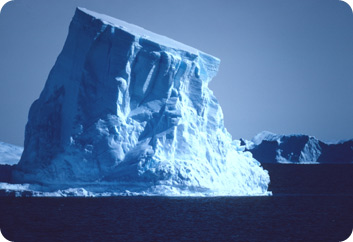 An iceberg in Antarctica. Credit: National Oceanic and Atmospheric Administration

To qualify as an iceberg, a chunk of ice must be at least 50 feet long, and stand about 17 feet above the surface. Even such a minimal berg would be huge, though, because almost 90 percent of an iceberg’s body is below the surface.

An iceberg is born when a chunk of ice at the edge of a glacier breaks off and floats into the ocean. As a glacier grows thicker, it sags under its own weight, so its edges push into the ocean. The rise and fall of the tides weakens the ice, so eventually it breaks.

In the northern hemisphere, most icebergs come from the west coast of Greenland. They follow the Labrador Current down the coast of Canada and into the North Atlantic. Most Atlantic icebergs look like castles, with big, jagged spires of ice. The tallest ever recorded measured 50 stories above the surface.

Most southern icebergs have wide, flat surfaces. They come from Antarctica, and can grow to monstrous proportions. The largest ever seen, which was twice the size of Delaware, broke off the Antarctic ice sheet in 2000. Two years later, it split apart. The largest surviving fragment was splintered in 2005 by a swell in the waters around Antarctica caused by a storm in Alaska -- more than 8,000 miles away.