Marine scientists explore the sea in many ways. They drop instruments over the sides of boats, watch with orbiting satellites, and scoot around below the surface for a few hours at a time inside small submarines. But there’s only one place where they can hang out below the surface for long periods: an underwater lab known as Aquarius. 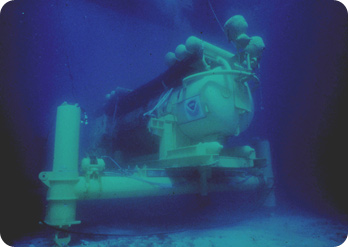 It’s owned by the National Oceanic and Atmospheric Administration. It’s a big metal cylinder anchored about 50 feet down near a coral reef in the Florida Keys. It provides living quarters and lab space for up to six people at a time, while a buoy on the surface pipes down air and power.

While researchers are working aboard Aquarius, the air pressure inside is the same as the water pressure outside. That allows them to live in the habitat for about 10 days at a time or longer, and spend many hours a day outside the lab, in the water. They only have to decompress once -- before they surface at mission’s end.

Over the years, dozens of scientists have used Aquarius. Many of them have studied the nearby coral reef. They’ve found that ultraviolet radiation from the Sun can penetrate the clear waters and damage the reef. They’ve also learned more about how corals feed, and how they react to increasing pollution.

The Navy uses the facility to study new diving techniques, and NASA sends down astronauts to train for missions in space. But most important, Aquarius allows scientists to explore a strange new world -- the bottom of the sea.