At the bottom of almost any ocean, you’ll find an assortment of creatures with small disk-like bodies and five gangly arms: brittle stars. They’re described as among the most “cosmopolitan” creatures in the sea, because they’re found around the world -- from the Arctic and Antarctic to the tropics. 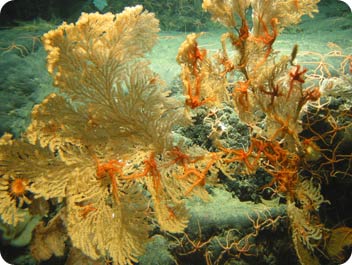 Brittle stars aren’t the same as sea stars, although they’re related. The arms of a true starfish are larger, and they blend smoothly into the body. A brittle star’s body forms a small disk, and the arms radiate out like skinny ribbons or strings. The arms give the brittle star its name. When a predator grabs hold, an arm easily snaps off, allowing the creature to escape. The arm grows back.

Brittle stars also move differently from sea stars. A sea star pushes itself along with small tubes on the bottoms of its arms. But a brittle star moves by wiggling its arms -- either like squirming snakes, or in a coordinated, rowing motion.

Brittle stars are bottom dwellers, so they mostly eat the leftovers that fall to the ocean floor. They feel around for food, and use their tube-feet to move the particles along grooves on their arms toward the mouth.

Not only are brittle stars found in a lot of places, they’re found in great numbers, too. Brittle stars can dominate the floor of the Arctic Ocean, for example. And off the coast of Southern California, millions of them can cover large areas of the sea floor in layers up to an inch thick.