When Ferdinand Magellan sailed into a great new ocean west of the Americas, it was so tranquil that he named it the Pacific -- a name that means calm and peaceful. 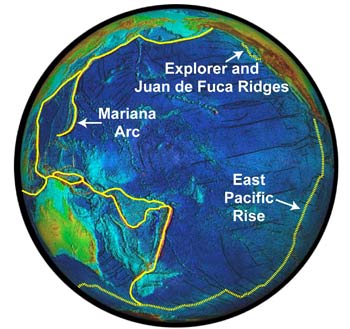 But the rim of the Pacific is anything but peaceful. It’s known as the “Ring of Fire,” and it’s one of the most geologically active zones on the planet. It’s best known for the volcanoes that dot the landscape from New Zealand to Alaska to the tip of South America. But it’s also responsible for arcs of volcanic islands, and for the deepest chasms in the oceans.

The ring of fire is created by the motions of Earth’s crust. The crust consists of thin plates that float atop layers of denser rock. The plates are all moving, and areas where they intersect are quite active.

Most of the Pacific is atop a single large plate, with a few smaller ones along the margins. Some of the edges of these plates plunge below the plates that form the continents. The areas where ocean plates collide are particularly deep. In fact, the greatest depth of all is the Mariana Trench, in the western Pacific.

The motions of the crustal plates cause earthquakes. And as one plate dives beneath another, its rock melts, and some of it forces its way to the surface through volcanoes. This creates the volcanoes of the Pacific Northwest, among others, and it also builds volcanic islands, including the islands of Japan and Aleutians in Alaska.

So while this ocean is sometimes pacific, its rim most certainly is not.