The bulkiest animal on the planet is the blue whale. But it may not be the longest. That distinction may go to one of the most ethereal of all animals -- a jellyfish. The tentacles of one species can stretch almost half the length of a football field. 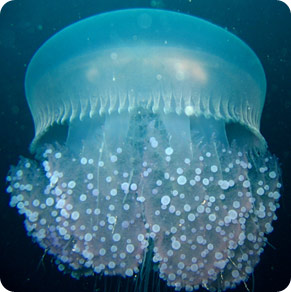 There’s no scientific definition that covers all jellyfish. In everyday usage, though, a jellyfish is any of thousands of species with a bulbous, sac-like body and streaming tentacles. These animals are among the most common in the oceans. They’re found from icy arctic waters to the tropics. And they’re found along all coastlines.

Jellyfish are also among the simplest animals on Earth. A true jellyfish has no bones, no brain, and no ears, though a few have rudimentary eyes. A jellyfish is about 95 percent water, with a structure of simple proteins and sugars.

Some of the jellyfish’s tentacles have venom-filled barbs that stun or kill their prey. They can give people quite a nasty sting, too -- even from a jellyfish that’s washed up on the beach. So admire these graceful but dangerous creatures from afar -- not up close and personal.