Although it’s best known from Hollywood movies, with tense submarine crews listening to the “pings” from enemy ships, sonar is an important tool for exploring the oceans. Over the last few decades, marine scientists have used it to map the ocean floor. 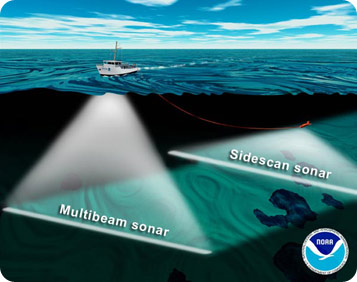 Illustration of a ship using a hull-mounted multibeam sonar while towing a side-scan sonar on a cable. Both sonars map the sea floor in a swath below the ship as it drives forward. Credit: National Oceanic & Atmospheric Administration

“Sonar” is short for Sound Navigation and Ranging. A device sends out a pulse of sound, and a detector picks up its reflection from solid objects below it. The military uses sonar to detect submarines, and archaeologists use it to find shipwrecks and sunken cities.

Marine scientists use it to study the ocean floor. They produced the first map with sonar in the 1950s. But sonar became an especially powerful tool with the advent of computers.

Scientists use a couple of types of sonar.

Multi-beam sonar sends out pulses from a device on the bottom of a ship. Detectors measure how long it takes the pulses to bounce off the bottom and return to the ship. That reveals the ocean’s depth, and the shape of its floor.

Side-scan sonar sends out pulses from a device towed behind the ship. It measures the intensity of the reflection, which provides information on the texture and composition of the ocean floor. Mud and sand, for example, absorb most of the sound, so they don’t reflect much of a signal. But hard volcanic rock reflects a strong signal.

When combined, these techniques provide a detailed 3-D look at the ocean floor -- one “ping” at a time.