The aircraft carrier U.S.S. Oriskany showed the colors during the Cuban Missile Crisis, was home base to John McCain before he was shot down over Vietnam, and starred in a Hollywood movie. And last year, the decommissioned carrier made one last bold move. 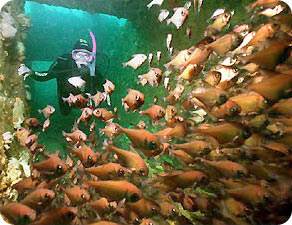 A shipwreck serves as an artificial reef. Credit: Department for Environment and Heritage, Government of South Australia

She became the largest artificial reef in the world when she was scuttled in the northern Gulf of Mexico off Pensacola, Florida -- a reef that’s 888 feet long and 145 feet tall.

Over the last couple of decades, hundreds of ships have been sent to the bottom to serve as artificial reefs. They provide hard surfaces for corals, sponges, clams, and other organisms to latch on to. These organisms attract many other species, creating vibrant colonies of life.

Artificial reefs are big economic-development tools because they’re popular spots for recreational fishing and diving. But they can play an environmental role, too, by luring people away from natural reefs. And there’s some evidence that they may increase the total abundance of marine life in coastal waters.

A ship needs a lot of work before it’s sunk, though. Workers pump out its fuel and bilge tanks, clean greasy surfaces, and strip out batteries, fire extinguishers, and other sources of dangerous chemicals. Loose plastic and wood are removed, too, so that birds, turtles, and other creatures don’t get tangled in them.

So it can take months to turn a big ship into a big new apartment complex for undersea life.