Life in the oceans can be beautiful, violent, even startling. And sometimes, it’s just icky. 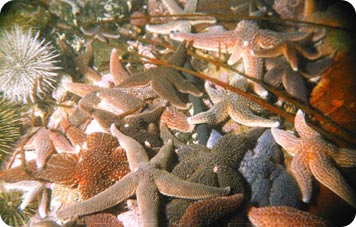 An example of all of these can be found in the sea star.

The beauty part is easy to see. Many sea stars are among the loveliest creatures in the oceans. Their graceful bodies come in an artist’s-palette of colors, from pale yellow to sapphire blue to fiery red.

For "startling," try the sea star’s ability to regenerate itself. Most species can regrow lost arms, while some can regrow an entire body from a single arm.

The violent and icky parts come in its feeding habits. The sea star frequently feeds on mussels and clams. It wraps itself around the shell, grabs hold with small "tube feet" that act like suckers, and pulls the shell open. This opening is usually too small to reach in and scoop out the animal inside -- and relaxing its grip would allow the shell to close again.

So instead of pushing in an arm, the sea star pushes in a stomach. It can extrude its own stomach, and squeeze it into the shell. The stomach surrounds the clam or mussel, liquifies it, then ingests it. When the shell is empty, the sea star pulls its stomach back inside to finish digesting its meal.

Despite the gross factor, the sea star helps maintain an ecological balance. Off the coast of California, for example, an adult ochre star can eat up to 80 mussels a year. Without the sea stars, mussels would crowd out other creatures -- an "icky" prospect in its own right.