The white cliffs of Dover are among the most famous landmarks in the world. They rise hundreds of feet above the English Channel. They look toward France, which is only about 20 miles away -- less than the length of a marathon. 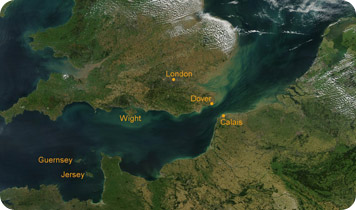 Hundreds of thousands of years ago, you could have run between Britain and France. They were connected by a narrow strip of land from Dover to Calais. But a recent study suggests that the bridge was washed away by one of the most massive floods yet discovered.

Geologists from Imperial College in London used sonar to map the Channel floor. They found a wide valley carved deep into its bottom. The valley is broken by small islands. They have a streamlined shape, which means they were carved by a torrent of flowing water. And parts of the valley have deep gouges that may have been carved by giant boulders carried by the flood.

In that distant past, glaciers covered much of Europe and Britain. Melting water pooled where the North Sea is today, forming a large lake. Eventually, the lake rose high enough to spill over the land bridge. It carved a channel, which grew wider and deeper as water roared through to the Atlantic. The flood was so dramatic that it washed away the bridge in just a few months. It carved the English Channel, separating Britain from France -- and creating the magnificent white cliffs of Dover.