When it comes to sea turtles, the leatherback swims alone. Almost everything about it is different from other species, from its size to its ability to keep warm. 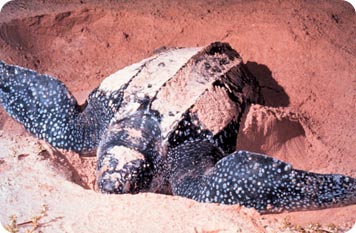 The most obvious difference shows up in the name. While other turtles have hard shells, the leatherback’s is leathery and flexible. Ridges provide streamlining, so a leatherback can sustain speeds of a couple of miles an hour -- faster than any other sea turtles.

Another difference is size -- leatherbacks are the largest marine turtles. An adult typically measures six feet or longer, and the largest ever recorded weighed more than a ton.

Leatherbacks also cover greater distances than other sea turtles; scientists have tracked them across entire oceans.

Leatherbacks can operate in much colder waters than other turtles, too. They’ve been monitored diving in waters that were more than 30 degrees cooler than their body temperature. No other reptile can handle such a difference. Leatherbacks are fairly compact, and they’re insulated by layers of fat. Their circulatory systems provide extra temperature control, too.

One way in which leatherbacks aren’t different from other sea turtles, though, is their status. They’re easily trapped in fishing nets, and they get tangled in plastic debris or swallow plastic bags, which they mistake for their favorite food, the jellyfish. And coastal development is harming their nesting sites. So the number of leatherbacks is dropping fast.