Great white sharks are some of the most impressive animals on Earth. They’re big, strong, and fast, and have lots of big, sharp teeth. And scientists are discovering something else impressive about them: They can really get around. 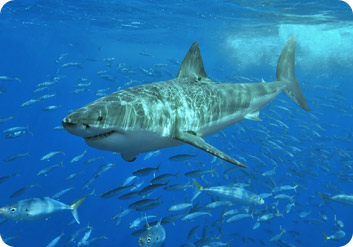 Most great whites are found off California and Baja California, around Australia and New Zealand, or off South Africa.

In the last few years, marine scientists have closely tracked individual sharks from these groups. They’ve tagged the sharks with small instruments that record their movements and other data, and transmit the information to satellites when the sharks break the surface.

A study released in 2002 found that a male great white traveled from California to Hawaii -- a distance of about 2300 miles. He stayed there for about four months before returning to California.

The champion traveler to date, though, was a female who was tagged off South Africa. Beginning in late 2003, the 12-foot shark journeyed to the western coast of Australia -- a distance of 7,000 miles -- in just 99 days. She returned to South Africa nine months after she left.

The scientists who tracked the shark speculated that she may have traveled to Australia to mate, and returned home to give birth. If so, then there may be a strong link between these two populations of great white sharks -- even though they’re a third of the way around the world from each other.