You might think that the best swimmers in the ocean would be the fish that live out in the deep. But that turns out not to be the case. Some of the strongest swimmers are the young of fish that live on coral reefs. They’re strong enough to swim against the currents, and they have plenty of stamina. 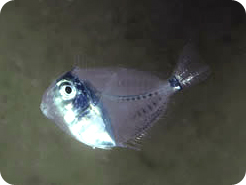 The adult fish that live on coral reefs release their eggs around the reefs, then abandon them to the currents. The eggs are carried out to sea, where they can hatch and develop in relative safety -- away from the predators that swarm around reefs.

As they begin to grow, the young fish don’t just drift along with the currents, relying on chance to take them close to a reef. They can hear and smell reefs -- and they have the means to swim where they want, even though they’re still quite small.

Researchers in Australia tested the young of several species. They found that by the time they reach about an inch in length, the fish could swim at up to 20 times their body length every second -- fast enough to overcome any current.

What’s more, they can swim a long time without stopping. In the lab, one young surgeonfish swam eight days without food or rest -- the equivalent of a 60-mile journey. Fish out on the actual reefs probably don’t swim so long or so fast because they don’t have to. But when they need it, they have the quickness to move in a hurry -- and the stamina to keep on going.