The Lost City of Atlantis sits in the middle of the North Atlantic, about half a mile below the surface. And it’s been there for a good 30,000 years or longer. 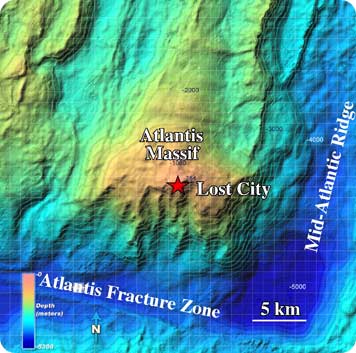 No, it’s not that Atlantis, but it is something just as amazing: a forest of rock pillars, spires, and beehive-shaped structures that are spouting hot water into the ocean. It sits atop an underwater mountain known as the Atlantis Massif, so when scientists discovered it in late 2000, they named it Lost City.

It’s near the Mid-Atlantic Ridge -- the boundary between oceanic plates, where hot rock is pushing up from deep below the ocean floor to make new crust.

Scientists have found similar features along ocean ridges around the world -- but nothing quite like Lost City. The other sites are directly atop the ridges, on some of the youngest crust on the planet. They’re hotter, and their spires of rock are dark.

But Lost City is about 10 miles from the ridge. It formed atop crust that’s a million and a half years old.

Seawater filtering into cracks in the sea floor undergoes chemical reactions that heat the water. As the heated water percolates back up, it carries along calcium-rich minerals that build structures of limestone. The most prominent is called Poseidon -- a pillar that’s almost 200 feet tall.

Lost City supports a dense web of microscopic life -- including some species that haven’t been seen anywhere else on Earth. They add to the alien aspect of the Lost City.