A hurricane’s delicate cloud bands and dark eye make it look like a beautiful but deadly pinwheel spinning across the ocean. 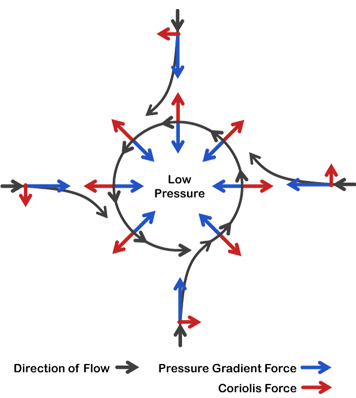 If Earth were flat and motionless, hurricanes wouldn’t form. Air would flow from high pressure to low pressure in straight lines, like boulders rolling from a ring of mountains into a central valley.

But because Earth is a spinning ball, air is deflected as it rushes toward the low pressure at a hurricane’s center. This deflection is caused by the Coriolis force, which has a big effect on large-scale circulation in the atmosphere and oceans.

The key to the Coriolis force is understanding that different points on Earth’s surface move at different speeds. At the latitude of St. Louis, for example, Earth rotates about 400 miles an hour slower than it does at the equator. That’s because a slice of the planet through St. Louis’s latitude is smaller than a slice through the equator.

So if you fired a cannonball from St. Louis south to the Galapagos Islands, which are on the equator, the islands would move far to the east before the cannonball got there. Like all moving objects in the northern hemisphere, it would be deflected well to the right.