There was a time when nesting Kemp’s ridley sea turtles covered some of the beaches of north-central Mexico as far as the eye could see. And thanks to intense conservation efforts, there’s hope that these turtles could blanket the beaches once again. 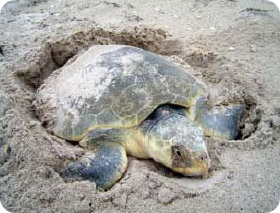 The Kemp’s ridley is the smallest sea turtle -- a couple of feet long, and weighing around a hundred pounds. It feeds in shallow waters from New England to the Yucatan Peninsula. But most of the turtles nest around Rancho Nuevo, Mexico.

In 1947, an estimated 40,000 females nested there in a single day. But by 1985, the Kemp’s ridley had all but vanished. Scientists estimated there were only about 250 nesting females that year. Poachers had been digging up the eggs, and shrimp trawlers were accidentally catching and drowning the turtles by the thousands.

Scientists recognized that the population was collapsing in the 1960s. Mexico began protecting the beaches, and the United States listed the turtles as an endangered species. Later, shrimpers were required to use nets that allow turtles and other animals to escape.

Thanks to these and other efforts, the Kemp’s ridley is making a comeback. Scientists estimate that about 5500 females nested last year. But the species isn’t safe yet. The Kemp’s ridley will remain on the endangered species list until the population includes at least 10,000 nesting females -- enough to once again blanket the beaches of their primary nesting grounds.