A small fish with a big sting is invading the coastal waters of the eastern United States. And that’s probably not good news for the species that already lived there. 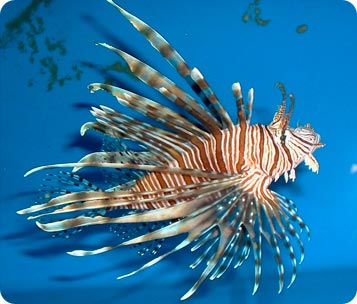 The invader is the red lionfish. It’s a colorful character, with red, white, and maroon stripes. It has bushy fins, and a variety of appendages around its head and mouth. It also has rows of spines that can inject venom. The venom probably won’t kill you, but it produces a nasty sting.

A lionfish’s natural habitat is the coastal waters of the Indian Ocean and the western Pacific. It particularly likes coral reefs, where it can use its pectoral fins to herd small fish and shellfish into tight spaces, where it gobbles them down whole.

But beginning in 2000, lionfish began turning up in alarming numbers off the East Coast of the United States. Today, adults are found from Miami to North Carolina, with juveniles as far north as New York.

Marine biologists believe that these lionfish came from aquariums. Hurricane Andrew blew some lionfish from a home aquarium out to sea, and it’s likely that owners have dumped more into the oceans as they discovered that the lionfish might eat other fish in their aquarium.

Scientists are trying to figure out how many lionfish are living in the Atlantic, and how they’re affecting native species. There are many cases where invading species have decimated the locals. So some scientists are concerned that this little invader could have a big impact in warm Atlantic waters.