Seahorses are fish and in scientific parlance, most of them belong to the genus Hippocampus. The name is from the Greek words for horse and sea monster. 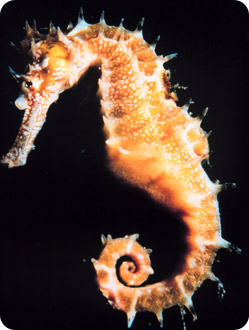 The horse part is easy to understand. The long snout, the upright posture, and the angle of the head all resemble a horse. But the sea monster part doesn’t quite seem to fit. Seahorses move slowly, they’re not aggressive -- unless you happen to be a tasty shrimp -- and they’re small -- the largest are only about a foot long, while the smallest are no bigger than the tip of your little finger.

Even so, seahorses are among the most popular creatures in the oceans -- and the most interesting.

Unlike most fish, for example, their eyes move independently, allowing them to scan more of their environment. They anchor themselves in the current by wrapping their tails around seaweed or coral. They don’t move very fast, so they rely on camouflage to protect them from predators, and to disguise them against the tiny fish and crustaceans that they eat.

Their most interesting feature, though, is the way they reproduce: the males get pregnant. A female seahorse deposits her eggs inside the male’s egg pouch. The young are born live, and they’re basically miniature versions of adults.

One other trait also sets seahorses apart from other fish: they’re monogamous. They keep the same mates, doing little dances with each other every morning before heading out to forage. That’s a decidedly civilized behavior for little sea monsters.