Fish have lots of ways to elude predators. Some are really fast. Others camouflage themselves, while still others hide in tight spaces. And a few take to the air. 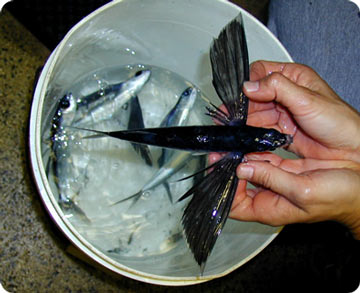 There are about 50 species of flying fish, which are found in warm waters around the world. They grow to about a foot long, and they feed on small animals near the surface of the water.

At the surface, silhouetted against the bright sky, a flying fish is a tempting target for a tuna, marlin, or other predator. So nature has given the flying fish some good defenses.

They’re shaped a bit like torpedoes, for example, so they’re streamlined for high-speed getaways. And the corneas of their eyes are flatter than those of most fish, so they can see both in and out of the water.

But most important are their fins. The fins at the front of the body are much larger than in other fish. When fully spread, they look like wings. Some species have a second set of winged fins behind the first. And flying fish have unusual tailfins, with the bottom section bigger than the top.

When it senses danger, a flying fish propels itself out of the water with the tailfin. It then spreads the other fins and glides through the air. Some species can reach heights of several feet, and glide the length of a football field or longer. Sometimes, they dip the bottom lobes of their tails back into the water, generating enough momentum to stay airborne for up to a quarter of a mile -- and keeping them alive to soar another day.