For the people who dock their boats in the upper reaches of Canada’s Bay of Fundy, timing is everything. For part of the day, the boats float serenely alongside the piers. But a few hours later, they can be sitting 20 feet lower, on the bottom of the bay. The boats don’t sink -- the water level does. Tides in the Bay of Fundy are some of the most dramatic on the planet. 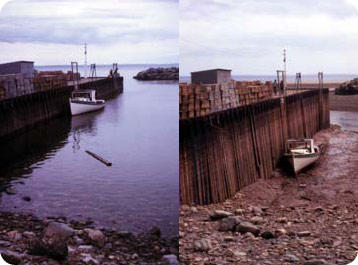 The Bay of Fundy at high tide (on left) and low tide (right). http://en.wikipedia.org/wiki/Bay_of_Fundy

The bay is just off the northeastern corner of Maine, between Nova Scotia and New Brunswick. It’s about 170 miles long, and it’s shaped like a funnel -- both from side to side and top to bottom.

As the tide rolls in, the narrowing channel and the shallower bottom force the water to pile up. At the same time, Fundy’s length and shape set up a natural resonance with the tides. The time it takes the tide to go in and out is the same as the length of the cycle of tides. So when one tide makes its way back out to the entrance to the bay, another is already flowing in. So the water level at the head of the bay typically varies by around 40 feet from high tide to low tide -- and it can vary by 50 feet or more.

But the surge doesn’t end at the shoreline. The incoming tide can overwhelm the rivers that empty into the bay, creating a tidal bore -- a wave of water that pushes upstream, creating some impressive turbulence.

Someday, these tides may be harnessed to generate electricity. For now, though, they generate a lot of tourism -- and some tricky timing for boat owners.