Emperor penguins gained a bit of stardom a few years ago when they were featured in "March of the Penguins," an Oscar-winning documentary. Today, they’re gaining another bit of fame, but one they could do without: Emperor penguins are especially sensitive to the effects of global climate change. 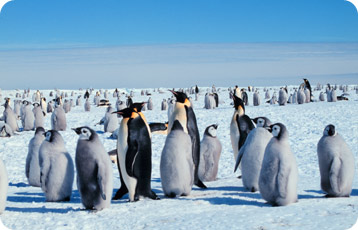 Emperors are the largest of all penguins, and they can live for up to 40 years. They also dive deeper than other penguins -- to depths of hundreds of feet.

Emperors are the only Antarctic birds whose chicks hatch in the winter. A chick "nests" atop its father’s feet, snuggled beneath layers of fat. While the chicks hatch and grow, their mothers shuffle to open waters to feed -- covering hundreds of miles. When they return, it’s the fathers’ turn to head to sea -- after about four months without a bite to eat.

The parents abandon the chicks when they’re a few months old. The chicks reach the water and drift away on chunks of ice. They remain there for several years.

Most emperors live on ice that’s frozen atop the sea -- not on land. But changes in global temperature can affect the amount of sea ice. Thinning ice sheets are less stable, so strong winds can blow large chunks out to sea before the chicks can fend for themselves. And warmer waters may affect the species that emperors feed on, too.

So scientists are watching emperor penguins. Changes in their numbers could be one more indication that a warmer climate is having a dramatic impact on the Antarctic.