Europa, one of the moons of the planet Jupiter, could be a marine scientist’s dream world. Its icy crust floats atop a global ocean that could be miles deep. And it’s even possible that life could float through the watery darkness -- perhaps around volcanic hotspots on the ocean floor, or even in the coldest depths. After all, life on Earth survives in these environments -- and some that are even tougher. 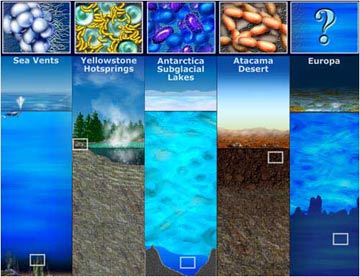 Organisms that live in extreme environments are called extremophiles. They’ve evolved to endure intense heat and cold, high pressure, environments that are very salty or acidic, or places with no oxygen. They use whatever is handy as a food source -- from hydrogen to minerals in rocks -- and can form thriving colonies.

In the 1970s, for example, scientists discovered a dazzling variety of life around chimneys on the ocean floor that pump out superheated water. Some bacteria live in the plumes, near the boiling point. Tube worms burrow into the chimneys, while crabs and other creatures scuttle around them.

Microbes also thrive in temperatures at or below freezing in Antarctic waters and sea ice, and in the extremely salty depths of the Mediterranean. They’ve also been found in sediments at the deepest part of the ocean, where the pressure is more than a thousand times greater than at the surface.