Mothers frequently pass their knowledge and wisdom along to their daughters. Now whether the daughters actually listen is another matter. But at least they have the chance to learn from the experience of earlier generations. 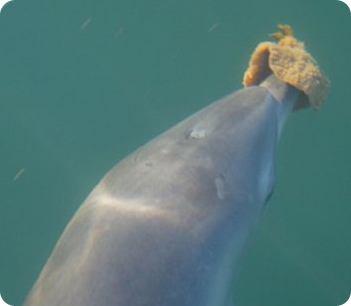 The daughters of some bottlenose dolphins apparently have been listening to their mothers. They’ve learned how to use sponges to help them fish.

It’s just one more example of how intelligent dolphins really are. They’re highly social animals who sometimes coordinate their hunting with other dolphins, and even with people. They have a complex communication system, and they’re easily trained. And a recent study even found that they could admire themselves in a mirror.

But the sponge trick is one of the most impressive yet. It’s one of the best examples of social behavior -- behavior that includes learning from others.

Scientists observed the technique among dolphins in Shark Bay, in Western Australia. They found that more than a dozen dolphins would break off marine sponges and use them to cover their beaks. Then they’d use these tools to dig around at the bottom of the ocean -- stirring up fish, and perhaps protecting themselves from the venomous spines of the stonefish.

All but one of the spongers was female, and genetics studies showed that they were almost all related. This suggested that, rather than several individuals learning the technique on their own, it was invented not too long ago by a single female. Since then, it’s been passed down through the generations -- from mother to daughter.