Zebra mussels are natives of the Caspian Sea in Asia, but they’re making themselves comfortable in the Great Lakes. North American comb jellies are taking over the Black Sea. Overbite clams and Chinese mitten crabs are settling into San Francisco Bay. And all of them are causing a lot of damage to their adopted lands -- and to the pocketbooks of the people who live there. 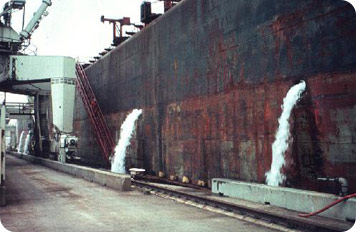 These species probably made their way around the world by hitchhiking -- they traveled inside the ballast-water tanks that keep ships steady and in trim. The ships take up seawater in one port, then let it out in another. The water can contain hundreds of species of fish, shellfish, plants, and other organisms.

In their new homes, these invasive species may not face any predators, so they can cause all kinds of trouble. The comb jelly, for example, gobbled up the food supply of the native anchovy, wiping out the Black Sea anchovy industry.

The hitchhikers cause lots of economic damage, too. It costs hundreds of millions of dollars a year to keep zebra mussels from clogging water lines, for example. And both commercial and recreational fisheries can suffer major losses.

Some ships now flush their ballast tanks in the deep ocean, but that doesn’t cure the problem. Companies are working on ways to sterilize ballast water with heat or chemicals. But until those systems are perfected -- and mandated for all the world’s ships -- lots of critters will keep on hitching rides.