The Gulf coast is known for warm waters and soft breezes from Campeche to the Florida Keys. But you don’t have to be anywhere near the Gulf of Mexico to feel its influence. It sends warm breezes to Europe, too -- from the fjords of Norway to the tower of Big Ben and beyond. 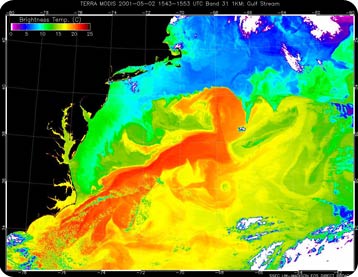 The Gulf spreads its warm embrace through the Gulf Stream -- a river of water that flows along the eastern seaboard of the United States and Canada and into the North Atlantic.

The Gulf Stream begins off the southern tip of Florida, where Gulf waters flow into the Atlantic. They join a swift current that heads northward along the coast. It’s part of a circulation pattern that swirls around the entire subtropical North Atlantic basin.

The Gulf Stream is especially strong. It flows at up to about five knots, and averages about 50 miles wide. The current extends far below the surface. As it flows along the coast, friction with the surrounding water creates little whirlpools that can break off and form eddies up to a couple of hundred miles wide.

The Gulf Stream loses its identity as it moves away from land and into the North Atlantic. Some of its warmer water forms parts of other currents that circle around to western Europe. These waters help keep the coast of Norway clear of ice.

The Gulf Stream warms Europe in another way, too. As winds blow out to sea from North America, they’re warmed by the Gulf Stream. These breezes may not feel tropical, but they help keep Western Europe fairly balmy -- even in the dead of winter.