Look! Down in the water! It’s a cow! It’s an elephant! It’s a mermaid! Or maybe it’s something that’s been described as all three: a manatee. 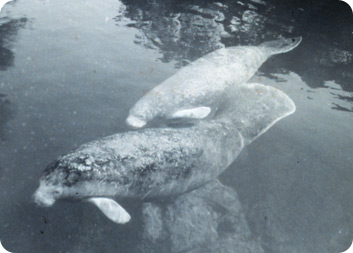 Manatees aren’t the cutest of sea creatures; in fact, they’re also known as sea cows. A manatee’s body looks like a big cushion, with a stubby snout at one end and a wide flipper at the other. And it has a drooping upper lip that sort of resembles the trunk of one of its closest cousins, the elephant.

Yet manatees have a unique charm. They glide through the water gracefully, and they show great affection to each other. When seen from afar, their contours may have inspired the legends of mermaids.

Manatees are the only plant-eating marine mammals. In a single day, an adult can gulp down about a hundred pounds of seagrass, mangrove leaves, and algae -- about a tenth of its body weight.

There are three species of manatee, found in the Amazon, off West Africa, and in the Caribbean Sea and Gulf of Mexico. Most of those in the Gulf congregate in Florida, where the water stays warm year-round.

But while the water may feel good, it’s not all that safe. Development has destroyed much of the manatee’s habitat. Fishing lines and nets sometimes entangle them. And boats frequently smash into them.

As a result, the Florida manatee is endangered. Manatees don’t start breeding until they’re 10 years old or older, so it takes a long time to rebuild the population. Conservationists are concerned that without more aggressive protection, this inoffensive creature could soon vanish.