The sea has long shared its bounty with people. Over the centuries, its creatures have provided food, fuel, clothing, and many other basic needs. And in the decades ahead, they may provide an abundance of one more necessity: medicine. 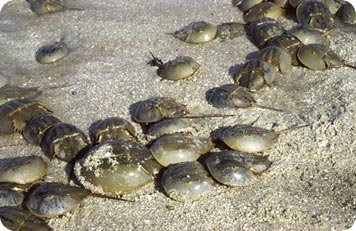 Many of the drugs in use today were derived from plants and animals found on land. But in recent years, researchers have started looking for new sources of medicine in the oceans.

Many marine organisms are powerful chemical factories. They produce toxins that kill their prey or protect them from predators. And they make other compounds that either attract their dinner or make predators turn up their noses.

A few of these compounds are already showing up in drugs or other medical applications. A few years ago, for example, the FDA approved a painkiller that’s a synthetic version of the venom of the cone snail. Drug companies also use a compound that comes from horseshoe crabs to test drugs for harmful bacteria. And a leukemia drug is modeled after chemicals produced by a Caribbean sponge.

Dozens of other medicines derived from marine organisms are undergoing testing: anti-inflammatory drugs and arthritis and Alzheimer’s treatments from sponges; chemotherapy treatments from sea squirts; and cancer-fighting drugs from bacteria and many other organisms.

Several institutions regularly send out expeditions to explore the deep oceans for new organisms that might be used in future medicines. Their work is already yielding fresh bounty from the sea.