Over the last century, global sea level has gone up by about eight inches. And over the next century, many predict that it could rise by several feet. 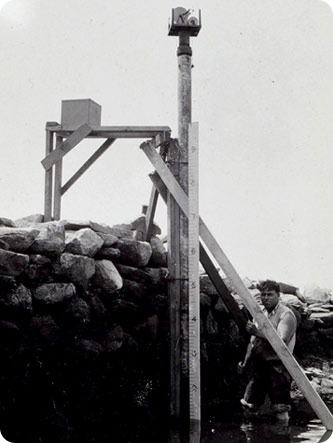 But tracking the changes in sea level isn’t easy, because the water in the oceans is never still.

The tides cause the level to go up and down every day. Winds pile water against the shore. Warm water expands, creating a higher level. And ocean currents, rain, changes in air pressure, and many other effects can cause the level to rise and fall.

The main tool for measuring sea level is a tide gauge. It’s inside a wide tube that extends above and below the surface. Water flows in through a hole in the bottom. In this protected tube, the surface of the water is calm, so it’s possible to get an accurate reading of its level.

In years past, someone had to check a tide gauge several times a day. But modern gauges automatically record the water level around the clock.

Scientists supplement the gauges with data from satellites. They’re not as accurate, but they can survey large areas in hours or minutes.

Satellites help in another way, too.