Nature has given an ugly critter known as the stonefish two great ways to protect itself. The first is its appearance. As its name implies, it looks like a rock; its coloring, rough texture, and odd appendages blend into the bottom of the shallow waters it inhabits. And if that doesn’t work, it’s deadly, too -- the most venomous fish yet discovered. 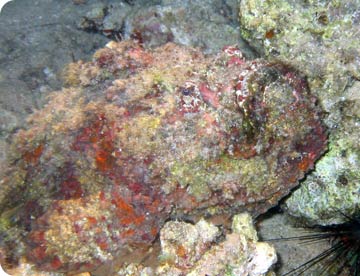 A stonefish camouflaged against the rock. Credit: Wikimedia Commons.

A study published a couple of years ago estimated that there are 1200 species of venomous fish. Some inhabit freshwater lakes and rivers, but most live in the oceans. Almost all of them inject their venom through sharp spikes on their backs or tails.

The list includes sting rays, stargazers, and scorpionfish. Few of them are found in U.S. waters -- a few species of scorpionfish off the Pacific coast, plus the imported lionfish off the Atlantic coast. Encounters with people are rare.

That’s not the case in the rest of the world, though. As many as 50,000 people are injured by venomous fish every year. Most of the victims are either fishermen who catch the fish in their nets, or people who step on the fish when they wade into the water.

That’s the case with the stonefish. It’s found in coral reefs and other shallow waters around much of the world. Its spines are sharp enough to punch through a shoe. Its venom causes painful burning and swelling. If not treated, it can kill tissues, and cause paralysis, shock, and even death -- a strong defense against any attack.

But venomous fish may also be a key to future medicines; more about that in our next program.