"The submarine Nautilus receives a gala harbor welcome as she sails into Portland, England, completing an 8100-mile, 21-day voyage from Honolulu across the top of the world under the north pole...." 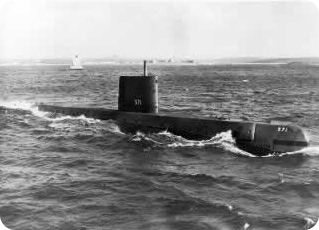 At the height of the Cold War, the USS Nautilus made headlines around the world. On August 3rd, 1958, sailing hundreds of feet beneath the Arctic ice, the first nuclear-powered submarine crossed the North Pole.

The trip earned some good international PR for American technology, which had been humbled by the Soviet Union’s Sputnik satellites. But it also provided the first direct measurements beneath much of the Arctic ice cap. Nautilus measured depths, water currents, and ice thickness along much of her route.

After an aborted try in June, Nautilus headed to sea in July, and this time had no problems with the crossing. Commander William Anderson marked the approach to the pole with a countdown, and stopped the boat at the pole to let his crew savor the adventure.

Nuclear submarines have made hundreds of crossings beneath the Arctic ice since then -- including some that carried scientists to study Arctic waters. Among other things, their readings have helped plot changes to the Arctic ice and waters, providing evidence of the effects of global warming.

But as this 1958 newsreel pointed out,

"...the glory of the first sub-polar transit belongs to Cdr. William Anderson and his 116-man crew ... for pioneering a new sea lane across the top of the world."